It’s Day 24 of the “self publishing journey” (of doom), but Day 1 (I hope) of a new morning writing habit. I woke up on my own recognizance at 5:30a and went, ok, I woke up at this time yesterday and didn’t get up. So, let’s do it today. Who knows, maybe there’s a 5:30a writing club on Twitter. Maybe they serve donuts or give out badges.

I’m still stuck. It’s not writer’s block per se. It’s a general frustration with this whole engagement. What I don’t know is whether this company says you have to write High Concept (based on a “What If” scenario) because that’s really the only thing that will sell. Or, if they say that because it’s generally something people will read when, inevitably, if you try to write a book and you’ve never written ANYTHING BEFORE – your writing is just going to be bad.

I don’t say that for any other reason than, I can look back at my own early novel-length fanfics and say: these are stinky, at least from a craft point of view. I think the overall stories have varying degrees of merit. And, bottom line, they’ve entertained people over the years, so? I won’t knock them. They are what they are.

So, to take stock of what I have because this is all I’ve thought about as I try to turn myself inside out and examine why I’ve reacted so badly and where can I start. And what can I do….

Novel-length AU Fanfic Ideas in progress:
– Losing my Breath (modern day romcom / romantica) << character-driven romance (45k words, complete, self-edited) What if life could be broken down into a series of “crucial moments”? Moments where everything was on the line. Trajectories altered. Lives lost, or even found. A new girl moves in next door to a former Special Forces Marine – helping a combat veteran defy his diagnosis and experience the real ‘crucial moments’ in his life.
– Walk Through Fire Series (Sci/Fi Romance) << character-driven romance (80k words, rough draft, 2 books completed). What if the world’s most frightening weapon could also tell the future? A veteran of the last great war between the citizens of Earth and Space tries to live a normal life, growing closer to the high-profile political figure forging the path to an interstellar peace. As Heero begins to hope the future the Zero system showed him during his last battle could be realized, the nascent peace accord begins to unravel.
– Revenants Rising (Fantasy/Romance) << High Concept, What If: our 3 main characters disappeared into the malfunctioning WARP during the AFO fight? (22k words, rough draft to ch 6) Fringe meets Superheroes to the tune of Take On Me. (I’ve been working on these summaries for an hour, now. I’m kinda over it)…may be too MHA “lore” dependent. Maybe.
– Chasing Victory (Young Adult Series; Action/Romance) << a college hockey player, physically and emotionally traumatized during his youth, chases a collegiate championship and a pro career – something his dad has force fed him his entire life. But, college is a time of questioning and change. As he makes friends, finds love, maybe ‘Victory’ could be / should be something different.
– Million Dollar PA (modern day romcom) << character-driven romantica (40k words, rough drafted) maybe: A down-on-her-luck estranged politician’s dollar on her last gallon of gas is offered the job of a lifetime: be a startup CEO’s personal assistant and ‘social companion’ for the next four years. His intention is clear: he’s willing to pay her $1M to be his PA “with benefits”.
– Eyes Like Fire (Fantasy/Romance) << High Concept. The dragons have all died out, and the balance of light and dark magic is on the verge of chaos. The Council of Elders insist, to keep the fae world in balance, that the last, pure-blooded princess of the airy fae must marry and produce an untainted heir. As the demon king plots to corrupt the world into darkness, the princess acquires a small but loyal following: a dhampir, a water nymph, an imp, a Banhai, and a half-demon shapeshifter of remarkable power. (22k words of a rough draft to ch 4)
– Fourth Dimension (SciFi/Romance) <<High Concept. Time is a bridge. Key decisions form critical “Janus Points” – pillars that brace / hold up the current timeline. To alter one is to create instability in the construction of the known universe. To alter more than one – the whole timeline could collapse into itself – destroying the very fabric of time and space in which we exist.
Years after the second civil war, a reluctant war hero still mourns the unsolved murder of his love – a beloved public figure. Haunted by memories and regrets, he searches in vain for her killer. Until the day a “scientist” brings him a time machine. Terrorists in the future are trying to change their world, targeting the Janus points within their lifetimes. To save the world, again, Heero must travel back in time to protect the past. A past where she was alive. And he absolutely cannot change the one thing he regrets most. (35k words of a rough draft to ch 11) << this one hates me, but I have to finish it

Honorable Mentions:
– Villains of Legend (Fantasy/Romance) << Robin Hood meets MHA (may be too MHA “lore” dependent)
– A Higher Reign (Fantasy/Romance) << a gifted princess bride becomes a legendary leader in the midst of plots to overthrow her husband’s father, the king (12k words, I’ve been trying to keep this one ‘contained’, but it keeps wanting to sprawl)
– Kuraokami (Fantasy/Romance) << a Maori princess frees the legendary Snow Dragon to help her save her world (5k words)
– The Red Knight (Fantasy/Romance) << a mercenary knight is sent to capture the (good) Queen of a country, and deliver her to the (bad) King of the neighboring nation. Except, she turns out to be more trouble than the money he was paid.
– Drive Like He’s Bulletproof (RomCom) << Heero, a disgraced auto racer tries to re-claim his career. His friend lures a very capable PR consultant out of semi-retirement (to raise her son) to help. Sparks fly. Yadda yadda. Sexy times and two people dealing with rebuilding lives after their first go at their individual dreams resulted in wreckage. (her marriage, his career).
– In the Dead of the Night (Action/Romance) << an assassin watches over and provides for the daughter of the one man he killed, on instinct (not for money / a job) 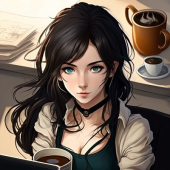 I've been a writer since before I could read (lol). It's a hobby I treat far too seriously. I have had some minor successes in a couple of nation-wide contests, but remain unpublished in the world of fiction. I have, however, been published as a non-fiction writer. All of that said, this a journal for my hobby writing. I write a variety of genres, focusing mostly on fanfiction. I prefer action/adventure or mysteries with some romantic elements. And my story "The Fourth Dimension", I'm convinced, was meant for Tom Clancy, but he was...indisposed at the time the universe was handing out the story idea. I hope you will read and enjoy something while you're here. Love, ~the Black Rose